Some of the music is composed by Francesc Marco; some of it is left unplanned. The band has been developing for some time its own way of collectively improvising music for dancing, focussing on groove and form, seeking to move away from the jazz-funk territory where solos and improvisation tend to detract from dancing. The band’s approach might be better desrcibed as spontaneous composition than improvisation as such. All the musicians are familiar with jazz in one of its incarnations and strongly rhythmical musical traditions from Africa and Latin America.

There are many influences. Groove, sound and attitude are inspired by old style funk bands such as the Meters, the JBs and Fela Kuti’s Orchestra. For composition and arrangement, the M-Base movement has paved the way for decades. On a local level , the F-IRE Collective, with which all band members have collaborated, and especially Barak Schmool’s Timeline, has helped and inspired the them to explore creative and meaningful rhythmical music.

Fred was electric-bassist with the band from when it was formed in 2006 until 2009. 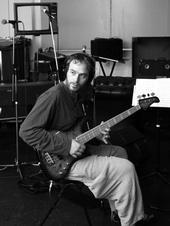